Moeen is potenti-Ali (sorry) the most significant newcomer to the England test (and ODI) teams in recent years. For the longest time have England craved a batsman who can bowl more than “part time” spin. It enables the easy selection of two spinners on turning tracks, and the option to always have a spinner – even when you don’t think you need one – on green seaming wickets, for example (though I personally loathe that view).

However, I don’t wish to talk him up right now – I aim to defend him for what I expect will be a very ordinary game for him – this, the second test vs the West Indies.

When he was first selected, he was under only a little pressure. He was batting well, and Cook barely bowled him. Genuine expectations of him, as a spinner, were low. And whenever he bowled a good ball people were surprised and happy. And the more he bowled the better he got. In the end, we all believed.

Then injury. And James Tredwell … a 100% bona fide spinner. Of considerable years and experience. Not flashy, but accurate and steady. And looks 300 years old. Almost. And he bowled terrifically well in the first innings, taking 4 for spit. BUT he “only” took one more wicket in the 2nd innings and was dropped – due to injury claim some.

This time Moeen was selected, on what would likely be a spinning track, with the expectation of bowling out the WI in their second innings when Tredwell couldn’t. To me this is wholly unfair. With this knowledge of replacing a genuine spinner in the team can come only pressure. And for what is, without question, the 2nd string to his bow.

I thought of penning this early on day, but because I’m lazy I didn’t get around to it until now (tea-time on day 4). Sadly – thus far – it doesn’t look good for our story’s hero. I’d not be surprised if this pressure (however unwittingly) causes his loose shot in the first innings and his run-out in the second. He is bowling a bit better in the 2nd innings, but I’ll not be shocked if Root (again) returns the better figures.

I hope I’m wrong and that Moeen can rise to the occasion but, for me, he’ll be a much better player if he is the 2nd spinner in the side (pick Ali AND Rashid) or the one spinner who is only called upon for smaller spells. 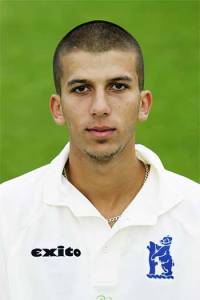