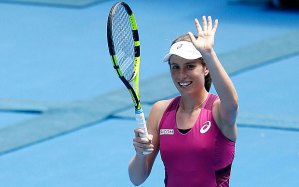 The near future of British tennis is looking pretty good – at least for the ladies. Johanna Konta is closing in, fast, on the world’s top 20, Heather Watson, between injuries, is constantly flirting with the top 40 or 50 – and Naomi Broady, with her BIG serve, has surged into the top 100 over the last year or so. And, possibly, the best talent of all, Laura Robson, is only out of the top 50 due to a phenomenally poor run of serious injuries 😦

However, the men’s game is not so well served. We have Andy, for sure, and Jamie – the world’s best doubles player now … but once you leave Dunblane the men’s game thins out dramatically.

One puzzle is this: we’ve been strong contenders are junior level for – if I understand it correctly – several decades. From that point on, our players (rankings wise) run away and cry in the toilet. A couple guys, right now, are trying to cement a place in the top 100, but the strength in depth of the men’s game is staggering. Not that this is the only reason – that doesn’t explain why our junior players drop off so.

Who knows. I sure don’t. I’m now bored of typing for no reasons.

Obviously, I mean flash in the pan … but in my head, pants was funny.

So, she lost to Sam Stosur having beaten Li Na. She wasn’t a long way from beating three grand slam champions back-to-back, and she would have faced a 4th (Azarenka) had she beaten Stosur. To illustrate what a tough draw that is, when Sharapova won Wimbledon aged 17, she only faced two grand-slam champions – in the semi-final (Davenport) and final (S. Williams). Not many players ranked down in the 80s & 90s beat two grand-slam champions in a row.

So why should you be excited about her? Well, Paul Annacone thinks that Laura already has a serve and a forehand in the top 10 of the women’s game. That is high praise by any standard; and these days it is weapons that win you grand slam titles on the WTA tour. Even in a 6-4 6-4 loss, in which she did not play her best, Laura hit 17 winners compared to 18 from the big-hitting powerhouse that is Stosur. Sadly Laura’s unforced error count was almost double that of Sam (41 to 24) and was the main reason for her loss. Fear not though, it is easier for a player to reign in unforced errors from an aggressive style, than it is to manufacture winners from a solid game.

Also worthy of a big mention is further evidence of Laura’s mental strength. She, from a relatively hopeless position in the match, refused to give in. She saved 8 match points and broke back once to demonstrate that she will not give in – this is another skill that cannot be taught. Another point I’d like to make is that, after her victory over Kim, she was asked about her form and quality of play. She remarked that it was wasn’t a drastic improvement of late, only that she had been injury free.

For me, there are two areas she needs to improve:
(1) to continue to reduce her unforced error count while maintaining her aggression, and
(2) to be able to perform, to this level, in lesser tournaments with smaller crowds (her best victories and performances have all been a big events).

I predict that, buy this time next year,
she will be deep inside the world’s top 32.

A little over four years ago I watched Laura Robson’s final three victories that she needed before lifting the Wimbledon Junior title. She was fourteen; she was the youngest in the draw. She impressed all with a big game – a strong leftie serve, and a powerful forehand that she’d often run around – much like a certain Steffi Graf. I could never hit my own backhand with any venom, and this trait was one I liked about Steffi, factor in that I’m left-handed and English – I liked Laura immediately.

There was quite a lot of hype around her; people talking big, people saying we should be patient, people saying she’d fail like all other Brits. I was full-on mad. I figured she had a chance of being the best British female for some time. I did acknowledge that it would take time.  So I watched, and I waited. I loved it when she played Hopman Cup with Andy Murray.

Her next big (huge) moment was the Olympic Silver Medal, in mixed doubles, with Andy Murray. I hoped that their time together in the Hopman Cup would help them, as the rapport between double-players in tennis is very important. It certainly can’t have hurt as they defied the odds together round after round, beating more experienced players and losing out in the final by the smallest of margins. Laura did make a few mistakes at crucial times, and appeared upset with herself – understandable as in any team game you feel you’ve let others down and not just yourself as in singles.

In round one of the US Open 2012, Laura Robson had the unusual task of playing someone younger than she was. She won, predictably enough, against the lower ranked player – after all “Robbo” is the youngest player in the WTA top 100. Round two she faced Kim Clijsters. Kim Clijsters who was awesome in round one thumping an impressively aggressive young American named Duval (remember her name).

Kim, you should know, has been playing well. She has beaten plenty of good players this year. However, two recent losses were what I would call unexpected: two close sets against Yanina Wickmayer, and a 6-1 6-1 thrashing by Angelique Kerber.  Laura clearly has no chance, I surmised. I thought she could, and would, give Kim a scare but her game (usually) features too many unforced errors for her to beat someone as seasoned and high class as Kim. Unless Kim plays badly, I hoped. Seldom am I as happy to be wrong!

In each set, Laura had to fight back from a break down. In each set Kim’s retrieval skills were jaw-dropping. In each set Laura won the majority of games that went to deuce … a statistic that Sam Smith says she considers to be vital; and she is a very astute commentator. Laura saved 3 sets points late in the second set. One of these was caused by a smash. Robbo had already won the point (against mortals) three times; Kim though, had other ideas and hit up an OK defensive lob when well out of court. Laura hopelessly miss-timed it and the ball crashed into the bottom of the net – to much hilarity on Twitter. To Laura’s immense credit, she dipped her head briefly but showed no other signs of the discontent she must have felt. She won the next three points and forced the tie-break. That was a moment of maturity beyond her years; it’s not only winning shots that tell you how good a player is – to be able to cope with disappointment is essential.

So Laura won the second set tie-break too, and now faces Li Na (in great form) in the 3rd round. Can she win that? Well, yes – providing she can play to that level again. One of the hardest things for young players is to be consistent at the highest level; one great scalp is not enough. I know she could win, but no-one yet knows if she will.

A crazy stat that will never change: Laura vs Kim — Head to Head.
“Laura Robson is in full control … of my breathing.”