England have had a problem in the last few years; not one of Alastair Cook’s many and varied opening parters has managed to cement his place in the team. Conventional wisdom has suggested that, across the counties, no-one else has “knocked the door down” – via weight of runs – to stake a claim either. This is bad; worse than a problem in the middle order, for it puts the side on the back foot right away. People are suggesting moving Root up the order; I’m against that. For whatever reason many batters prefer batting in one position and, for my money, Joe Root isn’t broken so let’s not “fix” him.

The above table shows the top 10 run makers in English first class cricket, this year. Some familiar names, some new names, a lot of runs. It’s really nice to see Mr Cook there too, that bodes well for England.

Now look at this next table. I have removed all the players who are not England-qualified opening batsmen (as in, opening for their county, this year). SEVEN of the top ten batters, thus far, are openers. Only one has partnered Ali Cook before (Robson) so there are, potentially, five choices – none of them would be poor. And that doesn’t count the not-wild possibilities that Alex Hales might keep his place, Jason Roy could be tried (though he doesn’t open for Surrey, he has shown great character in the international side) and James Vince has been close to contention. 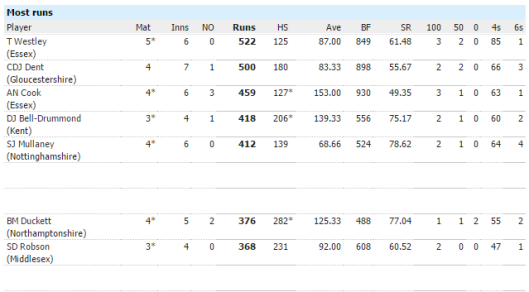 Who knows what will happen? I sure don’t. But it should be great to find out!